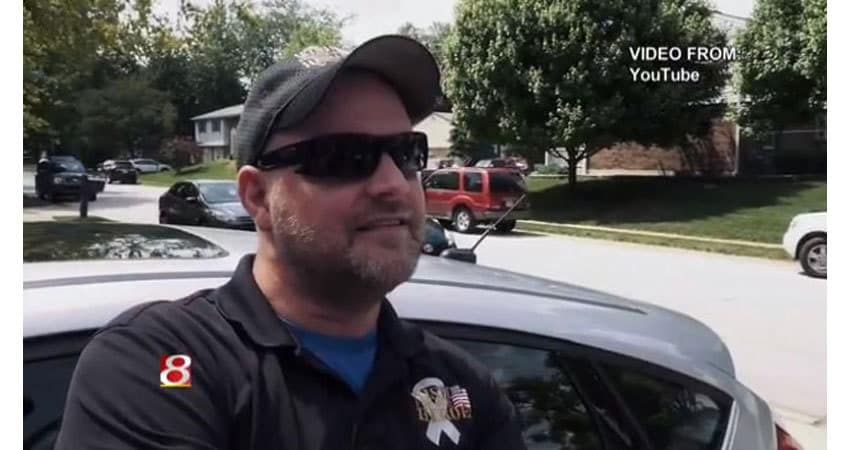 INDIANAPOLIS (WISH) —  A Hoosier veteran who spends his spare time helping others got a surprise last weekend.

Erich Orrick spent 21 years in the U.S. Army before retiring. He has a purple heart, a bronze star and now spends his spare time volunteering to help other veterans through the organization Wish for our Heroes.

“Imagine a guy overseas in Afghanistan, worrying about where his family’s next meal might be,” explained Orrick. “We want to make sure we’re that shoulder they can lean on.”

Orrick himself was injured in Iraq when a roadside bomb blew up near his vehicle. He’d much rather talk about the organization than himself any day, but it for one weekend, Indianapolis Colts players Pat McAfee and Coby Fleener, along with hhgregg, had other plans for Orrick.

It’s all documented in a YouTube video, #ThankaHero, showing how the players managed to trick Orrick into believing they were taping for a show that didn’t exist. While taping, they asked Orrick what he needed for himself.

“I would wish that … I had more volunteers and more cash. I’m good,” he replied in the video.

The players even got him to leave his house for the weekend. They got him out of his house for three days by sending him to Chicago. McAfee told him he’d won something through a charity, and he needed Orrick to spend the weekend there. It was all to honor what he does every day, by taking the weekend to transform his home.

Throughout the weekend, Fleener, McAfee and hhgregg associates redecorated Orrick’s whole house. They brought in new furniture, upgraded appliances, and even redesigned Orrick’s two daughters’ playroom in the basement.

Orrick tells 24-Hour News 8 the plan was almost thwarted by a well-meaning neighbor, who called asking if he was moving that weekend. Orrick’s first reaction was to tell the neighbor to call the police. His friend who was with him in Chicago told him it was people there for the charity and not to worry.

Once Orrick got back, he was greeted to McAfee and Fleener in his front yard. Orrick says his mind immediately went to the show “Punked.”

“Because you help out so many people, we decided it was your time to receive,” said McAfee on the YouTube video.

For a selfless guy, it was tough to receive.

“It was really hard because there’s a dozen people that need stuff more than I do. That’s why we work so hard,” said Orrick.

But on the video, the players and Orrick’s co-volunteers for Wish for our Heroes explain why he deserves a ‘thank you.’

“It’s because of the people like Erich, serving our country, we’re allowed to be free,” said Fleener on the video.

“He’s always helping other people,” added McAfee on the video.