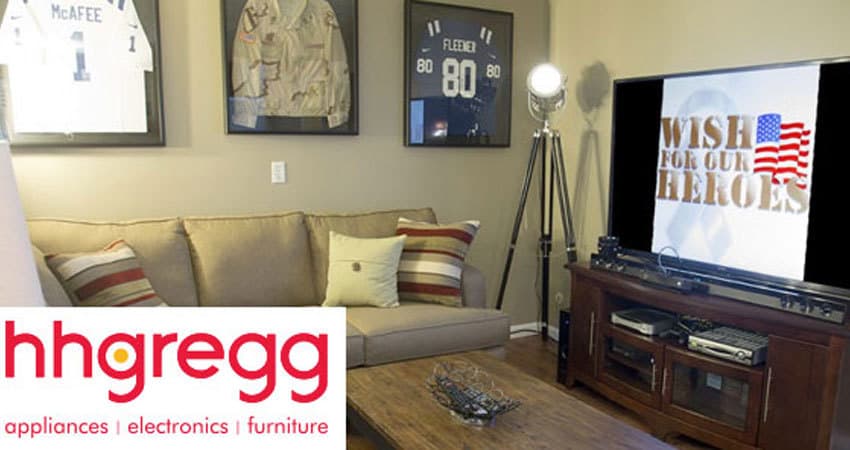 hhgregg teamed up with Pat McAfee and Coby Fleener of the Indianapolis Colts to pay it forward this summer. They are giving back to U.S. Army veteran Erich Orrick, who has been a recipient of both a Bronze Star and a Purple Heart. A single dad of two daughters, Orrick is the president of Wish for Our Heroes, a national charity that assists the men and women of the U.S. active-duty military facing hardships.

Wish for Our Heroes arranged for Colts punter McAfee and tight end Fleener to meet Orrick – and to thank him for his service and volunteer work, they gave him a weekend trip to Chicago. However, while Orrick took his family on the trip, the hhgregg team, McAfee, Fleener, and the Biehle family secretly gave the Orrick house a major makeover.

To pay it forward to Erich, who does so much for his country, community and family, we outfitted his home with the latest electronics, furniture and appliances from hhgregg (including a 70” flat-screen TV donated by Sharp, state-of-the-art kitchen appliances from GE, and a Broil King grill, to name a few!). McAfee and Fleener also donated $5,000 to Wish for Our Heroes in Orrick’s honor. After the renovations, Orrick continued to “pay it forward” by giving his previously owned furniture to a military family in need.

About 20 volunteers helped out with this project, spending more than 25 hours redoing Erich’s home in addition to months of planning leading up to the project. Jeff Pearson, hhgregg’s Senior Vice President, Marketing, adds, “We’re committed to helping create the homes of our customers’ dreams and enriching the lives of those in our communities . . . We’re proud to be a part of making such a deserving community leader’s home even happier.”

Watch the video below to learn more about Erich and view his home makeover! We hope this video will help others want to #ThankAHero in their own special way this 4th of July. Thank you so much to all the men and women who are currently serving or have served this amazing country.