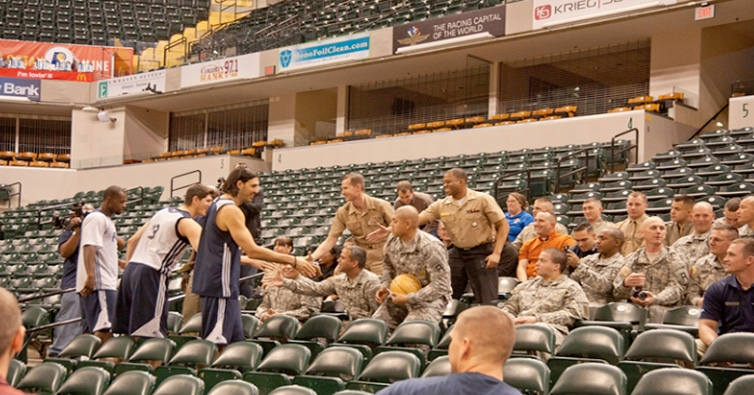 On Monday, Nov. 3 the Pacers partnered with “Wish for Our Heroes” to host 50 military service men/women at a team practice and serve them lunch in the Locker Room Restaurant at Bankers Life Fieldhouse. The afternoon's events kicked off “Hoops for Troops” Week, part of a year-round initiative led by the NBA, its players and the Department of Defense, USO and other military and veteran serving organizations to honor active and retired service men and women and their families.

Each soldier received a commemorative Hoops for Troops t-shirt and a Pacers Challenge Coin. Each and every Pacers player and coach took some time to visit with the soldiers, pose for pictures, sign autographs, and thank them for their service. Roy Hibbert even invited a few soldiers out on the court to try to shoot a few jumpers over the 7-foot-2 Pacers center.

Later this week, Pacers guard and Indianapolis native George Hill will treat eight sideline soldiers at each home game this week to a meet & greet with the team, tickets to the game and dinner from Levy Restaurants. Military children will also be used at the games as part of the Pacers High Five Club. Also, at each game the first 200 veterans to show a military ID at the Pacers Cares Kiosk will receive the special military Pacers Challenge Coin.

On Wednesday, Nov. 5, the team hostws a “Hoops for Troops” Staff Breakfast for all military veterans who work for Pacers Sports & Entertainment and any active-duty members. Each guest was given a Pacers Challenge Coin and game tickets.

On Thursday, Nov. 6, Pacers volunteers will gather to assemble and prepare over 250 military CARE packages for soldiers serving overseas from Indiana. Each package is provided by Anheuser Busch as part of its “Here’s to Our Heroes” initiative and will include a letter from a Pacers coach or player, a Pacers t-shirt, a Pacers Challenge Coin, canned food, powdered drink mix singles, sunflower seeds and dried fruit and assorted other needed supplies.

On Saturday, Nov. 8, CNO Financial Group (the parent company of Bankers Life) and the Military Warriors Support Foundation will honor a local wounded veteran who will receive the keys to a mortgage-free home at halftime of the Washington game. And, finally at the Nov. 10 game with Utah, the Pacers will recognize local veterans of World War II.