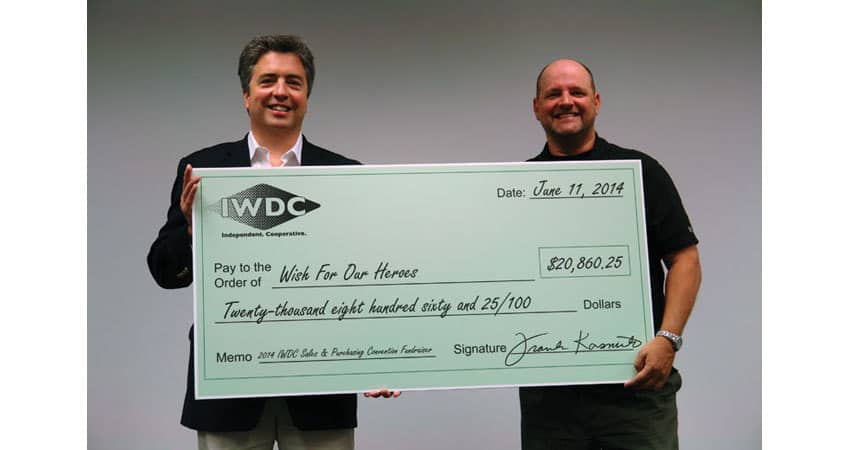 Indianapolis, IN – May 29, 2014 – In recognition of its March 1994 incorporation as a cooperative and consistent with a key cooperative principle: Concern for Community, IWDC’s Member Owners and Vendor Partners topped their fund drive goal during their May 13-15 Sales & Purchasing Convention.

“We set a goal early on to raise $20,000 for the Wish For Our Heroes (WFOH) Foundation and are very pleased to announce we collected $20,860.75 for this noble cause, states Ed Holmes, IWDC’s VP of Hardgoods Marketing & Supply Chain.

The convention’s 500+ attendees, representing many of the best independent welding distributors and industry vendors, gathered to conduct business, network, train, and learn from each other. Raffles and donations in the form of purchased “WFOH bonds” were mixed in during the three day racing themed event.

“In addition to supporting Member Owners’ and Vendor Partners’ mutual growth, IWDC through WFOH, was able to help a military family who lost all their belongings to a home fire. We are looking forward to presenting the WFOH Foundation with our check in early June”, said Frank Kasnick, CEO & President of IWDC.

The IWDC is a cooperative, formed in 1994, which leverages the strengths of its independent welding distributor members across North America. IWDC’s 140 Member companies collectively represent over $2.2B in sales, serving a wide range of industries. The common denominator is that these industries look to them for industrial, specialty, and medical gases as well as related equipment, hard goods, and consumables. End-use customers served by IWDC Members benefit from having the unparalleled expertise of a local Member distributor who has access to national-scale purchasing and marketing programs.

The Wish For Our Heroes Foundation, a national charity headquartered in Noblesville, IN was established in 2009 as a non-profit foundation whose sole purpose is to grant wishes for Active-Duty military soldiers and their families. WFOH is dedicated to “Helping Heroes Battle Hardships”. WFOH is a volunteer-based organization, allowing every dollar donated to directly assist the troops.