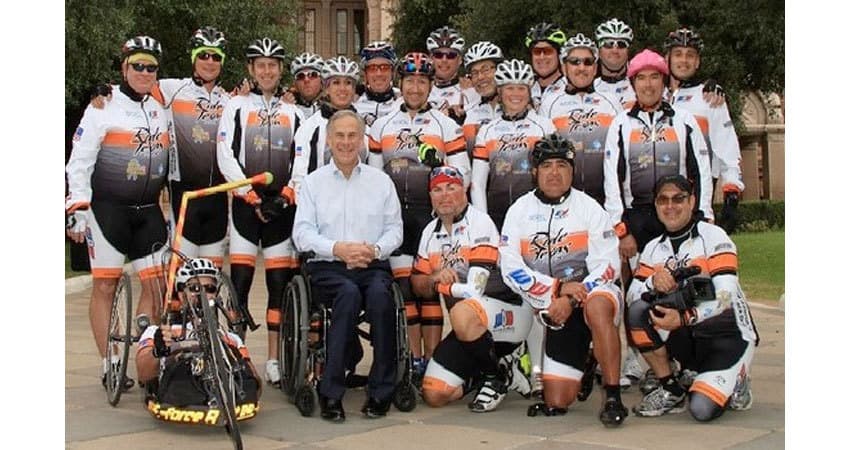 The Warriors on Wheels Ride 2013, a group of cyclists that include veterans and wounded service members, met this morning with State Attorney General Greg Abbott In from of the Texas capitol in Austin.

The ride started in Wichita Falls and has been met by Texans of all ages on their way to Corpus Christi.

Friday was the fourth day of their six-day, 500-mile ride across the Lone Star State.

“As Americans, we owe everything to the men and women in the armed services who work tirelessly every day to keep us safe, and to the veterans who have done the same,” Attorney General Abbott said. “It was an honor to have the opportunity to meet these individuals who are riding for such a worthy cause.”

During their brief visits at selected locations, the riders have given short presentations and recognized local veterans at their ceremonial stops along the way.

The riders are raising funds for Wish for Our Heroes, a volunteer-based, national, non-profit organization that provides assistance to military families struggling with burdens caused by deployment, family separation, and the daily strains of military life.

Known as the Warriors on Wheels (WOW) Cycling Club, they are also help fund the Trinity Oaks Warrior Celebration.

Trinity Oaks has a private meat processing facility in San Antonio that is used to process and package game meat for distribution to other charitable organizations and orphanages in Texas and Mexico.

One of the 24 riders is wounded warrior Charlie Lemon who is peddling with his arms, to “raise the money for our Texas heroes in need and paying it forward.”

The group has already rode from Wichita Falls to Fort Worth, Waco and Austin. They are currently on their way to San Marcos, New Braunfels and due in San Antonio tomorrow for a media day event this weekend. From San Antonio they travel to Beeville for Day 6 and then arrive in Corpus for Day 7.

Persons interested in supporting these heroes should text ‘America’ to 20222,

“Wish for Our Heroes is a volunteer-based, non-profit military charity assisting service member families across the nation,” indicates their website. “The organization assists military members (wounded and non-wounded) with basic needs such as food, shelter, transportation, and child needs. They are based in San Antonio and have granted about $3-million of assistance to members of all branches.”