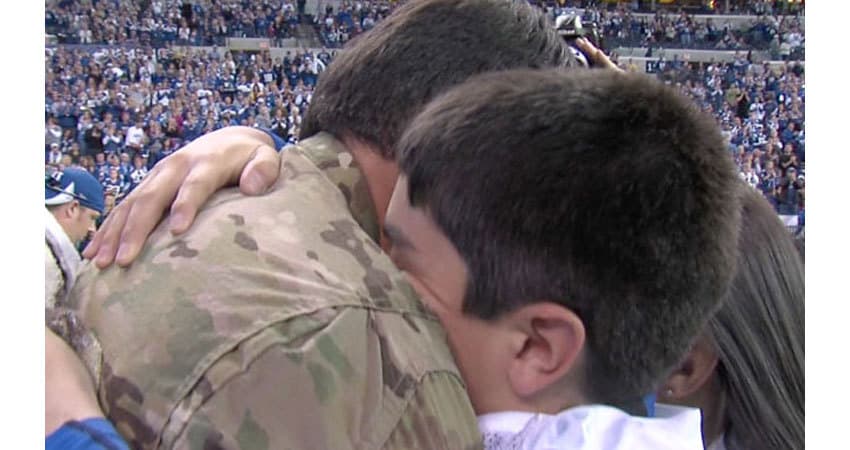 INDIANAPOLIS – The Indianapolis Colts honored a military family during halftime of Sunday’s game.

A wife and her two young sons were recognized for their sacrifice while her husband and their father was away in Afghanistan, but they had no idea what was about to happen.

As Stephanie Ino and her sons Dominique and David took the field, they received two major surprises.

Punter Pat McAfee told them he was aware that they had been having car problems, so he bought them a brand new Toyota Highlander.

However, there was another surprise inside the vehicle. The boys raced to greet their father Sgt. First Class Jeremy Ino. Ino had been in Afghanistan for the last seven months.

“Hopefully it will be a  moment they will remember forever. I wish we could have got them a win, obviously. That’s bigger than the game, it was awesome to be a part of it,” McAfee said.

The family was full of both gratitude and shock.

McAfee and the Colts played huge roles in the surprise, but it would not have happened if not for an organization called Wish For Our Heroes .

The organization was formed in 2009 and grants an average of 300 small and large wishes a day to soldiers. The group raised $3 million in 2012.

“It touched me because it brought me back when I came home to visit my family. My kids were in the stands. I got a hundred text messages and Facebook messages. Everyone was crying and tears. It was worthwhile,” Erich Orrick, vice president of the organization, said.

The Ino family currently lives in Florida and they were able to drive back home in their new SUV.

Sgt. Ino is originally from Evansville and his sons are big Colts fans.