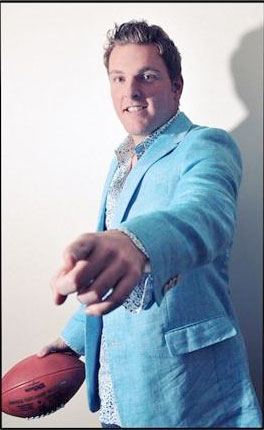 The home team's kicker showed once again why it's sometimes literally a joy to have him in this city.

Those are just the notable occupations that Indianapolis Colts kicker Pat McAfee boasts on his resume.

Now he can add “professional family-reuniter.” During halftime of Sunday's debacle game against the St. Louis Rams, McAfee one-upped the rest of the league's Veterans Day recognitions by surprising the Ino family of Indiana with a brand-new Toyota car after their vehicle broke down earlier in the week.

But wait, there’s more: Colts mascot Blue drove the car onto the field at halftime for the event sponsored by the Wish for Our Heroes Foundation. In the backset: family patriarch Jeremy Ino, who had just returned from his U.S. Army deployment in Afghanistan a week early.

Ino emerged from the car to surprise his wife, Christin, and two sons, Dominic and David.

The gesture was another example of the imprint the Colts punter is leaving on the Indianapolis community. He is arguably the most visible person in the Colts organization now who is not named Luck, Irsay, Wayne, and—well, you get the idea.