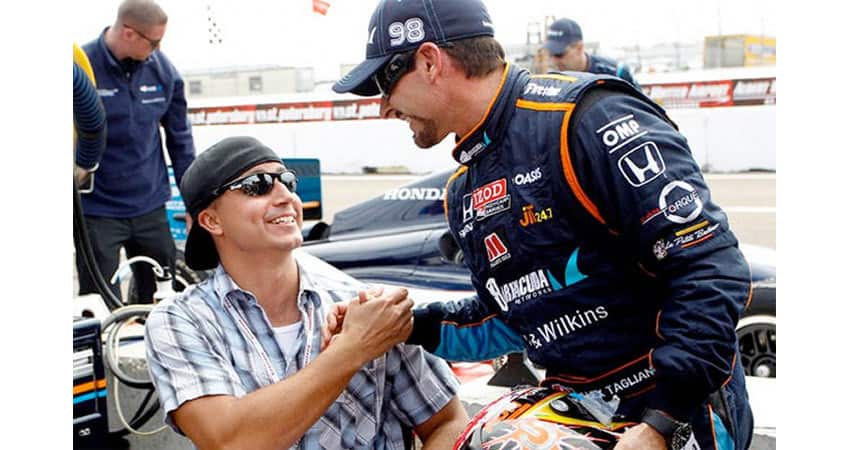 U.S. Army Spc. Charlie Lemon, a Tampa resident who also has lived in St. Petersburg, accepted the helmet on behalf of the charity. Lemon, 30, lost his legs during a mission in Iraq in 2011.

“I have a hard time saying no,” Tagliani said of the donation. “I can’t donate all my helmets. But when it makes sense and when it (hits) my heart, it’s something I can do.”

The race-worn helmet, which includes a Wish For Our Heroes logo on the back, is posted on eBay for a one-week auction. All proceeds are aimed at helping military members in need in the Tampa Bay area.

Lemon was introduced to Tagliani at a media event last month at Andersen RacePark in Palmetto, and Tagliani said that day he’d donate the helmet.

“That was definitely a touching moment,” said Lemon, who will serve as the grand marshal for Sunday’s race though he admits he’s more of a NASCAR fan. “It really shows that they care and they’re looking out for us.”

The GLOOMY FORECAST: Graham Rahal doesn’t care much about the possibility of showers or storms this weekend. The fact his lone series win came here on a rainy day in 2008 doesn’t hurt.

“It can rain all it wants for all I care,” Rahal said.

The National Weather Service predicts a 40 percent chance of thunderstorms Sunday. Rahal, the driver of the No. 15 Rahal Letterman Lanigan Racing Honda, said the track floods easily in Turns 7, 8 and 9.

He also said damp conditions would drastically change strategies because most drivers don’t have much experience on the Firestone rain tires introduced last year.

“Nobody really knows what to expect of this tire,” Rahal said. “But it’s all part of the show.”

REDEMPTION: Last year, Neil Alberico’s first in USF2000, was a success as he finished seventh in points with six top-five finishes.

But he’d rather forget his two races in St. Petersburg. Crashes prevented him from top-10 finishes. He placed 17th in the first race with a damaged car and did not finish the second.

“I know in one of the races I went into the wall, took out a banner and drove with it to the finish line,” Alberico said.

Alberico is back in USF2000 this season.

He has had a dominant start, winning five of six races at the series’ Winterfest as well as one of the two season-opening races last week at Sebring.

Front runner: Alex Figge established himself as the driver to beat in the GT class of the World Challenge.

Through two practice rounds and a qualifying session, Figge has the top position. In the second practice, Figge had the fastest lap of 1:15.686 (85.616 mph), two seconds off Ryan Danziel’s top lap from the first practice.

In the qualifying session, Figge’s lap of 1:13 set a track record.

“Obviously, it’s nice to be on the pace,” Figge said. “I think it’s a unique season.”

QUOTABLE: “I have not had the situation of being on the same team two years in a row. I almost feel like the Taylor Swift of racing because I’ve just been bouncing around all the time. It must be me. I must be the problem.” — James Hinchcliffe, who seems to have found a home (or at least a place where he won’t have to write a breakup song) at Andretti Autosport.

FAST TIMES: Will Power ran the fastest practice time of the day at IndyCar’s second session at 1 minute, 1.4467 seconds and said a sub-1 minute lap could be in the cards today in qualifying.

“I think we’ll go in the 59s,” he said. “With red tires (which have more grip), the track gets a second quicker by the time you get to qualifying.”