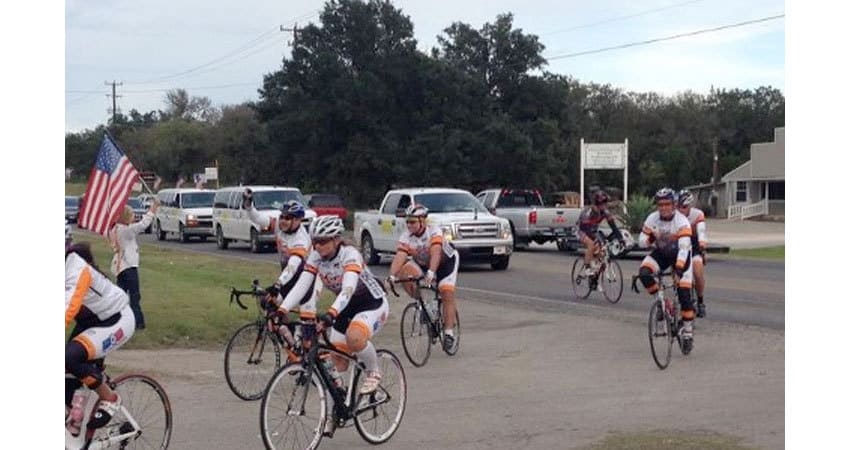 The 19 cyclists, sandwiched between Patriot Guard Riders on motorcycles and a support team of vans, made their way into Grumpy’s Mexican Café in Bracken around 4:30 p.m. on Friday.

Dozens of supporters cheered them on as they finished up the fourth leg of a 501-mile ride that began in Wichita Falls and continues to Corpus Christi.

“Every city coming down it was awesome, guys lining the streets, police were escorting us through intersections and what not,” said Army Spc. Charles Lemon (Ret.), who lost both legs in a mortar in Iraq in June 2011. “I have a lot of organizations that take care of me including Wish for our Heroes and Trinity Oaks, I’ve done trips with them and it’s good to pay it forward, pay it back and make sure that future veterans are well taken care of like I was.”

The riders get a rest day in San Antonio but many will take part in a 5K event Saturday in honor of Lemon’s best friend, Pvt. Matthew England, who died in the attack that injured Lemon.

“If it wasn’t for the sacrifices of soldiers before myself and Charlie, that they made, we wouldn’t be able to do what we do and that there are people still out there that support us and are grateful and that means a lot,” said Army Staff Sergeant Michael Lage (Ret.).

The ride began in 2011 and Warriors on Wheels raised $25,000 during last year’s ride. The group, based in San Antonio hopes to increase both fundraising efforts and awareness through the annual ride.

The group will leave San Antonio Sunday morning for Beeville and then head to Corpus Christi on Monday.  People can send $10 donations by texting “America” to 20222.