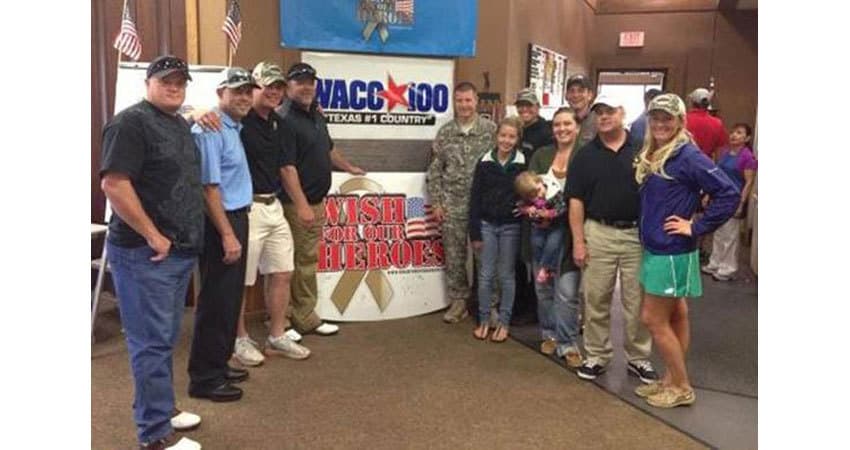 On April 20th, Wish for Our Heroes was honored to be the beneficiary of the 20th Annual All- American Heroes Golf Tournament hosted by Zack & Jim of Waco 100, Killeen/Waco’s hit country radio station. The event was a huge success, and over 33 teams raised money for our troops. At the event, W4OH surprised Specialist Gentry Mitchell of Fort Hood with a wish…

In Specialist Mitchell’s 4.5 years in the Army, over half of his time has been spent away from his family on deployments. He was deployed to Afghanistan from June 2011 to May 2012, and served a hardship tour in Korea from May 2009 to May 2010. As we see time and time again, this separation from family as a result of military life can be very straining on young families, particularly when children are involved. SPC Mitchell understands this is part of his duty while serving our country, but it doesn’t make it any easier on him, his wife, or his four children. In fact, he missed the birth of his son while stationed in Korea, and now while battling some financial difficulties, he is preparing his family for another leave this fall when he deploys to Afghanistan.

SPC Mitchell has been awarded three Army Achievement Medals and one Army Commendation Medal and works hard serving our country, while providing for his family. Despite his hard work, SPC Mitchell and his wife, Sharyn, are raising four children on a Specialist’s salary, which like all military, is a salary that doesn’t change without promotion. Therefore, when unexpected costs come up like moving his wife to be with her family during his deployment, or taking a high-interest loan to cover funeral costs for Sharyn’s grandmother, when there was no one else to foot the bill; it sets a family behind financially. One of SPC Mitchell’s biggest desires is to be able to legally adopt their 4th child, Macey, whom Stacey had from a previous marriage. Although he provides and cares for Macey as his own, he has not been in a financial position to go through with the adoption.

The Mitchell family has experienced several unforeseen expenses recently, and to relieve a bit of the strain, WISH for OUR HEROES gladly presented the Mitchell family with $500 in gift cards to help with groceries and fuel for their vehicle. We hope this gesture will help his family get back on their feet and we would like to thank SPC Mitchell for his dedication and service to our country.