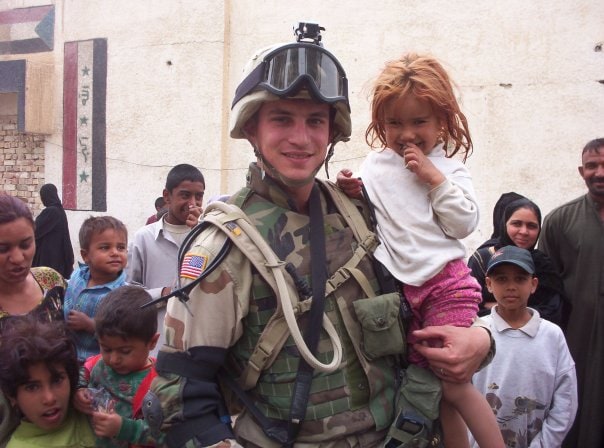 The Why Behind Wish for our Heroes

I’m the proud son of retired First Sergeant Thomas G. Wells, a Marine, who served in both the Korean and Vietnam Wars. Dad was a decorated Marine, having received multiple purple hearts, bronze stars, etc.  He had never mentioned his service as I was growing up but began to open up when I returned from my own deployment, Operation Iraqi Freedom 2 in 2005. Maybe because I’d served in combat, he felt there was a level of mutual understanding which enabled him to feel comfortable talking to me.  As we discussed our time in combat and traded ‘war stories’, we realized that the same exact situations had occurred in previous wars.  Many people view the Korean and Vietnam wars as valleys of darkness for our nation.  The national perspective towards those wars and the way those returning heroes were looked down upon and disregarded was horrendous. Although our returning troops are welcomed home today with wide arms and hailed as heroes, they are still facing the same scenarios and still struggling to meet the basic needs of themselves and their families.

I came to this realization while in Iraq and remember it as though it were yesterday. In mid-2004 I returned from a routine combat patrol in northwest Baghdad, Iraq and saw one of our company’s best soldiers sitting outside of the Tactical Operations Center, bent over crying with his head in his hands. Our battalion was part of the 91st Engineer Battalion, 1st Cavalry Division out of Ft. Hood and we averaged four enemy attacks each day.  The stress of combat could easily push a soldier over the edge. With suicide rates skyrocketing at the time, I was very concerned for him.  We had just lost two of our best soldiers a few days prior in a massive IED blast, so I assumed he was upset over losing our guys.  We all were.

I approached him slowly, put my hand on his shoulder, and asked if I could join him.  He nodded his head, and I sat down next to him.  I laid my weapon and body armor to the side, put my arm around him, and asked him what was wrong.  As he began to speak, his story was occasionally interrupted with sobs and tears, but the general narrative was this:  Several weeks prior, he had re-enlisted for 6 additional years of active-duty service which came with $10,000 bonus (a ton of money for an E-4). Just weeks later, he waited in line to use one of the computers at the Morale, Welfare, and Recreation tent to see if the bonus money had been deposited into his account.  He was shocked to see that although the money had been deposited, every single penny had been withdrawn the next week afterwards.  His wife had withdrawn and spent ALL of his bonus money as well as his normal semi-monthly pay.  He immediately called home but couldn’t reach his wife. Through a friend he found out that she was struggling with substance-abuse and had used the bonus money to purchase narcotics.  Meanwhile, he was terrified about the welfare of their three young children.  He had no money and was literally calling from a battlefield. How could he put food on the table for his family back home?  How would the bills be paid?  With his wife unreachable, what could he do?  Had she left him? He reached out through official military channels to asked for help even though asking could imperil his job.  Because his situation didn’t fit within the normal guidelines for an AER (Army Emergency Relief) loan, he was denied financial assistance. This soldier was scared, helpless, and 5,000 miles away from his family with no way of providing any type of assistance.  On top of that, he just signed up for an additional 6 years of active-duty service to his country, and now he had no idea if he would have a family to return to.

After hearing his story, I was shocked and angry.  Two primary points remain with me from that conversation, and I can remember his story as though it were yesterday.  First, I was shocked that his source of sadness was not the loss of our soldiers.  I quickly learned that soldiers expect injury and death when engaging in combat operations and that we all understand the consequences when entering enemy territory. In fact, when one of our soldiers was lost or injured, we would typically rally united in a desire to honor the lost.  Second, I couldn’t believe that this soldier didn’t have an easy way to get help.  With the nearly innumerable military non-profits out there and government programs, I couldn’t believe that was in helpless situation with no resources available to aid him in his crsis.  I remember wondering ‘how could he possibly focus on our combat missions when the well-being of his family was in jeopardy back home?’

Debunking a Myth
Many people assume that all military families have sufficient food, a roof over their heads, adequate medical care, basic necessities met, and money to provide their children with educational supplies.  Unfortunately, this could not be further from the truth.  When my dad and I realized the depth of financial challenges our military brothers and sisters meet, we vowed to start a non-profit organization to assist with these basic needs.  My dad had always been very pessimistic about donating to charitable organizations. He critiqued their excessive administrative costs, and he believed that the money would not end up where donors intended it to go.  In fact, in the small town that my parents lived in, my dad had a friend that worked in the courthouse and was responsible for providing local aid to the homeless.  Because my dad trusted him, my dad would give him money to provide directly to the homeless.  By not donating to a 501(c)(3), my dad wouldn’t receive any tax deductions, and he didn’t care.  His primary concern was to ensure that his funds actually assisted those who needed help.

Beginning W4OH
In 2005, my dad was not in good health and I didn’t have a penny to my name. In the weeks leading up to his death, I went home and spent as much time as possible with him.  In the evenings, I pieced together a business plan for a charity to assist military families with basic needs: things like food, shelter, transportation, child needs, medical expenses, and other basic necessities.  While I had zero non-profit experience, I couldn’t imagine that it could any harder than planning a combat mission or doing many of the things we were asked to do in the Army. Dad passed away April 27, 2009 and on the evening of the day he died, I made the decision that we were going to start this charity in his honor; it would be named ‘WISH for OUR HEROES.’

Over the next several weeks, I called many of my military buddies and asked if they would be willing to help.  I reached out to the few corporations and asked if they would be willing to provide funds to begin granting wishes.  In July 2009, we formed WISH for OUR HEROES.  We didn’t have an attorney or an accountant, so we filled out our own 501(c)(3) application, which is a cumbersome process.  At the time, there was backlog for 501(c)(3) applications, and we finally received a positive decision from the Internal Revenue Service in March 2010.  We didn’t see a need in waiting, so we granted our first wish on November 2, 2009, for SPC Rob Forrest and his family of six in Killeen, Texas (outside of Fort Hood).  SPC Forrest had been deployed 3 out of the past 4 years on combat deployments, while his wife and oldest child struggled with severe medical conditions that prevented his wife from working.  They had a family emergency, which caused them to have no funds to put food on the table that month for their family.  In addition, their one family vehicle had broken down.  We repaired their vehicle and provided four months of food to help get the family back on their feet.

Volunteer Led With Transparency & Low Overhead Costs
After that, we just kept granting one wish after another.  None of us had any fundraising experience, so we spent our weekends holding boots at intersections in San Antonio, Indianapolis, and other areas where our volunteers were located.  We would raise a few hundred dollars, then we’d call the chaplain and ask if he/she knew of a family who needed help.  We’d help them, then we’d go raise a few hundred more dollars.  Our charity started with zero paid employees, and today, 9 years later, we have one part-time employee.  Everyone told us along that way that ‘there is no way you can run a successful charity without having full-time employees.’  We wanted to ensure that the largest possible percentage of funds was utilized to assist military families instead of being used towards overhead expenses.  W4OH does not spend money on marketing or types of ‘glitzy’ programs.  As a result, we have been able to maintain less than 6% administrative and fundraising costs since we started WISH for OUR HEROES.  Additionally, we focus on transparency.  We want donors, both individuals and corporations, to see exactly which military families they are assisting.  When we grant assistance to a family, we call it a ‘wish’.  To date, we have provided more than $15 million in assistance to military families in 49 out of 50 states.  We have volunteer chapters in San Antonio, Austin, Indianapolis, Phoenix, Jacksonville, Denver, and Washington DC, with more chapters in the works.  Our organization is fueled by volunteers, and our volunteers are fueled by an unparalleled passion to assist our heroes, who sacrifice so much for all of us.  We live in the greatest nation in the world, and the freedom we enjoy has come at a price.  In my opinion, this isn’t a ‘feel good’ thing to do. It’s our mission, and we’re going to continue this mission until we’ve assisted every single soldier who needs help.