During the 2012 Memorial Day weekend, ML Motorsports teamed up with WISH for OUR HEROES (W4OH) to grant several wishes at the Charlotte Motor Speedway during the History 300 race.  Mary Louise Miller (owner of ML Motorsports) and Billy Hutchinson (Marketing & New Business Development) invited members of the Armed Forces, their families and W4OH personnel to attend the race in Charlotte, NC on May 26, 2012.  ML Motorsports and W4OH teamed up to grant several wishes throughout the course of the weekend.

The weekend began on Friday morning with a golf outing sponsored by Donald Long, father of ML Motorsports car #70 driver Johanna Long.  This was a great time for the soldiers and the race team to interact with each other and to have a very relaxing start to a great weekend.  On Friday night the entire group gathered to attend Johanna Long’s birthday celebration at Dave & Buster’s.  Since her birthday was actually on race day, everyone decided to celebrate a day early.  Hoss and Drew Waters tested their driving skills against Johanna on the NASCAR driving simulator.  Thanks to Johanna wrecking at the very end, Hoss represented the military well by finishing in first place.   ML Motorsports, Johanna, her family, W4OH personnel, and the soldiers had a blast joking, playing games, and getting to know everyone. 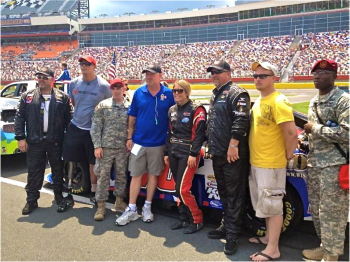 On race day, everyone arrived at the track 7:30.   The pit crews were extremely busy getting the car ready for qualifying and racing.  Everyone was amazed at the skill and attention to detail that goes into preparing a car for qualifying and the race.  It reminded the soldiers in attendance of the level of detail that is required to prepare a complex military operation.   The highlight of the morning was the dedication of the WISH for OUR HEROES #70 car!  For the History 300, ML Motorsports dedicated the #70 car to W4OH, and wrapped it front to back with the W4OH signature logo.  This was more than $100,000 worth of sponsorship that Mary Louise Miller decided to donate to W4OH, as a token of her appreciation for our nations’ heroes.   The looks on the faces of our soldiers and all the fans the first time that they saw the car were unbelievable.  ‘Words cannot express our thanks and appreciation to the ML Motorsports team for this great honor.  Lots of troops will be assisted as a result of this #70 car,’ Vice President Bo Brister explained with an ear-to-ear grin on his face.  Following qualification, everyone relaxed in the garage area until the race started. As if the #70 car wasn’t enough, ML and W4OH had one more big surprise for the day.  Mickey Stroud , W4OH volunteer and friend, presented Hoss with a very special wish. Mickey and his company MPM Medical teamed up with Dr. Bradley A. Pontani MD at Southeast Texas Would Care Specializes in wound care, sports medicine, undersea and hyperbaric medicine, to assist Hoss in treating his wound that has been open for the past 6 years since he was severely wounded in Baghdad, Iraq.  The wish consisted of flying Hoss to Houston in order to evaluate him then utilize a new Wound Care technique to help heal his wounds that military doctors have been unable to heal in the past 6 years.  Along with Mickey, Billy Hutchinson, Johanna Long and Bo Brister presented the wish to Hoss.  Needless to say Hoss was not only surprised but extremely appreciative that he “may someday be able to lead the productive life that he envisioned 6 years ago”.  “With this Procedure ”, he stated, “I will be able to continue working with military members and the public to bring awareness to our men and women in uniform”. 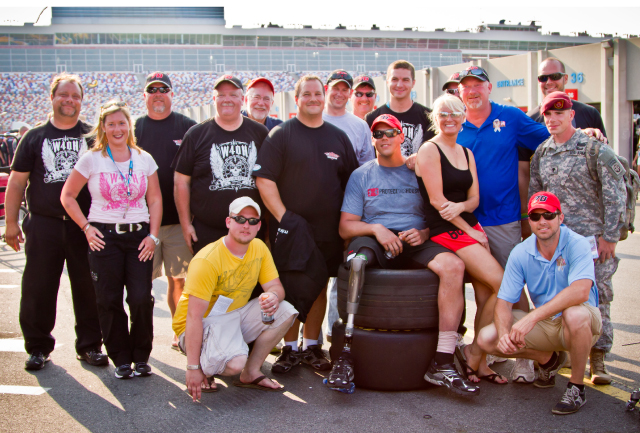 For the remainder of the day, W4OH and ML personnel watched Johanna finish 22nd in the #70 car.  After a fast paced and exciting weekend, Billy Hutchinson summed the weekend by saying, “It was the best weekend of my life and can’t wait till we all get together again”.