MSgt Jason Cooper and his wife, Carolyn, have been dealt more than their fair share of heart-wrenching tragedies. They lost their daughter, Sophia, at the age of three, due to a deteriorating condition called Cerebral Atrophy. This is a condition which results in massive global brain damage. In layman’s terms, her body was growing, but her brain was not.

When they had their second daughter, Madelyn, they were heartbroken to discover that she, also, had this devastating condition. The disease has affected her central nervous system causing seizures with durations that last up to 90 minutes. She is a spastic quadriplegic and exhibits Cerebral-Palsy like symptoms with very little cognitive ability. She suffers from hypertonia and Opisthotonia, conditions which contort the body in excruciating ways.

The severity of the seizures requires powerful medications to combat the episodes. The daily meds, combined with both valium and morphine used to control the spastic, painful movements, have many negative side effects. Among these are the risks of slowed respiration and central nervous system apnea events. Madelyn is perpetually monitored by both a heart-rate monitor and an oxygen-saturation machine. During moments of high tone or seizures, the risk of reflux and aspiration create an optimal environment for pneumonia, if not remedied quickly, thus requiring an in-home nurse to provide constant supervision.

Radar, the Cooper's family dog, has been in training to become a certified Seizure Detection Dog. Radar will be able to alert the Coopers promptly with any health emergencies. Because of his immediate response to the seizures, medical aid will be issued promptly to help thwart pneumonia and other life-threatening problems. Wish for Our Heroes has supported this venture and has provided necessary supplies for Radar. We have donated a service dog harness vest, a bed, a dog bathtub, and other essential items needed to maintain a Seizure Detection Dog.

This photo is from one of Radar’s visits home to imprint with Madelyn. 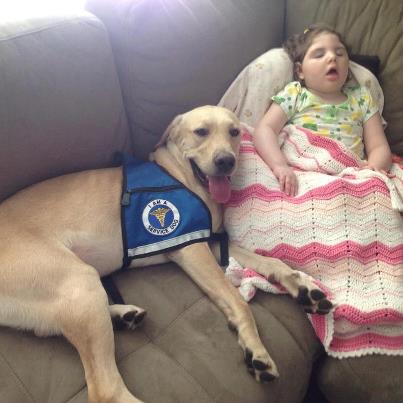