Governor Mitch Daniels took time yesterday, July 26, to meet with Wish for Our Heroes at the Indiana 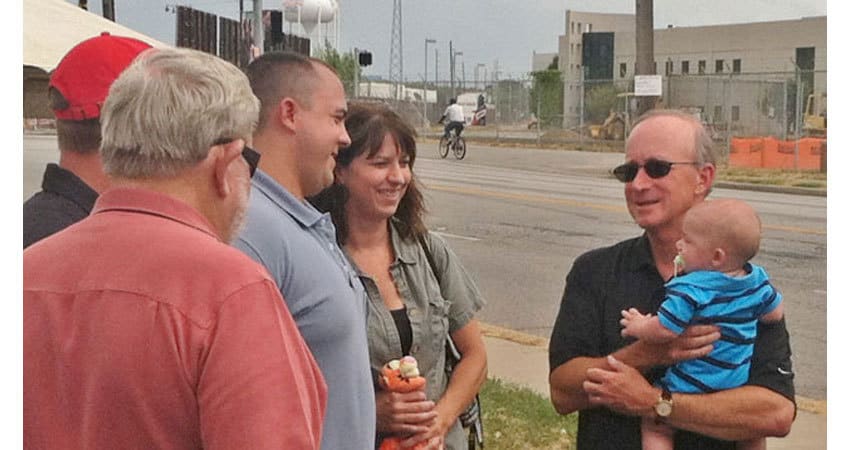 SGT Brandon Pugh, of Martinsville, Indiana, grew up a Hoosier and enlisted in the United States Army immediately following high school.  Following Brandon’s military training, he deployed to Khowst, Afghanistan from 2009-2010, where he sustained multiple injuries to his back, legs, and ultimately suffered from severe Post Traumatic Stress Disorder (PTSD).   Following Brandon’s return, he married his long-time fiancé Shawna Hamilton in November 2010.   Shawna brought 2 children into the marriage (two girls – ages one and three), which Brandon accepted as his own.  Simultaneous to Brandon’s return and marriage, he was given orders to the Warrior Transition Unit (WTU) in Fort Knox, Kentucky to focus on rehabilitating his injuries.  During that time, Brandon and Shawna had a child of their own, and on February 19, 2012, Branson Pugh was born.  Just two months later, on April 24, 2012, Shawna passed away unexpectedly, leaving Brandon, who was still rehabilitating from his injuries, to take care of Branson (2 months old at the time), and both of Shawna’s children.  Shortly after Shawna’s death, her two children were removed from Brandon’s care and placed with their biological father.

WISH for OUR HEROES learned of Brandon’s situation through the Camp Atterbury chain of command in May 2012.  WISH for OUR HEROES immediately met with CSM Otis Pugh, Brandon’s father, as well as Brandon’s chain of command, and everyone agreed that Brandon simply needed a fresh start in life.  Many people see the impact of war through visual injuries such as scars, burns, and amputations.  Brandon is one of tens of thousands of military members dealing not only with physical injuries, but also invisible injuries (severe PTSD) often caused from the severe mental trauma of war.  On top of the physical and mental injuries, the situation was compounded by losing the mother of his child and the love of his life.   WISH for OUR HEROES began a joint effort with local community members and businesses to begin rebuilding Brandon’s home and provide a fresh start for Brandon and Branson.  Wilhelm Construction, along with other local businesses, immediately volunteered to provide free construction services.   Each Saturday, volunteers gather at Brandon’s home to assist Wilhelm employees in the construction effort.  WISH for OUR HEROES has made multiple donations of its own funds and orchestrated the effort to find additional donors.  ML Motorsports team members have provided furniture for use upon the completion of Brandon’s home.  This is an ongoing wish, and the Hoosier community will not stop until it has provided a fresh start for Brandon and Branson.  On Thursday, July 26 at the Indianapolis Motor Speedway, WISH for OUR HEROES, ML Motorsports team, and Governor Mitch Daniels, presented the next $1,000 of funds raised to the Pugh family.  The funds provided will be utilized for construction materials for Brandon’s home.  This particular wish is a shining example of the power of Hoosiers helping Hoosiers: local residents, businesses, and non-profit organizations coming together to assist a Hoosier military family in need.