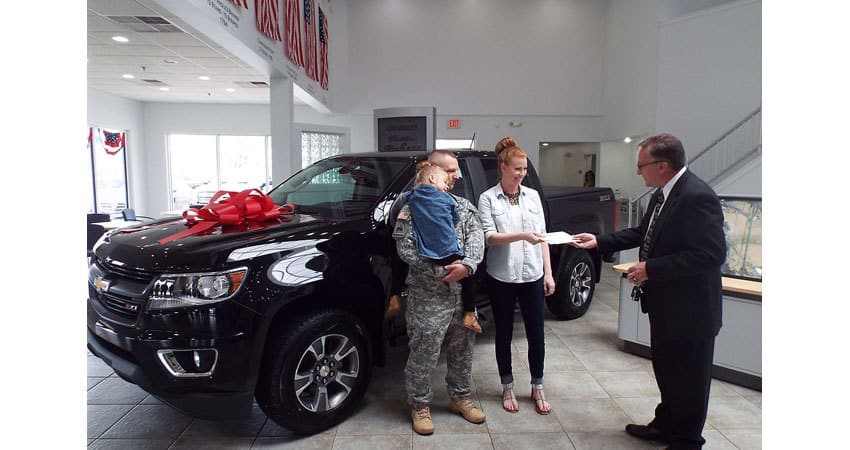 A Fort Riley soldier whose on-post home was destroyed by a fire received a brand new pickup truck Tuesday to help his family as they recover. Staff Sgt. Jonathan Thompson was preparing to deploy to Kuwait when his family’s home at Fort Riley was destroyed by a fire. The family lost everything in the fire, all of their belongings and personal items. Despite the fire, Thompson had to continue with the deployment. His wife Lizz was left alone back home, with a 4-year-old daughter, and the overwhelming task of dealing with the fire and starting over.

Some of Thompson’s fellow soldiers submitted his story to Wish For Our Heroes, an organization dedicated to assisting men and women of the military. The group reached out to Chevrolet, who decided to provide a 2015 Colorado pickup truck for the family. Lizz was surprised with the announcement, which came back in December at the annual Army / Navy football game. Lizz told KSAL News that she thought she had simply been awarded a trip to get out of town for a few days and enjoy the game. She was shocked when she was called out onto the field at halftime and told that she was getting a truck. She was even more shocked when her husband Jonathan, who was supposed to be in Kuwait, appeared as well. There were hugs and tears as the crowd broke out into a spontaneous, thunderous, “USA” chant.

“We had always watched those homecoming surprises on TV”, Lizz said. “I had told him never to do that to me because I wasn’t sure if my heart could take it”.  She continued with a big smile “it’s okay though, I’ll think about it, and him, every time I drive MY truck!” Jonathan conceded, saying with a big grin that his wife would primarily use the truck. “It will be the perfect vehicle for our family”, he added.

Jim Clark Chevrolet-Cadillac in Junction City provided the pickup for the Thompson family. The dealership gave it to them Tuesday morning. As employees gathered around and applauded, General Manager Willie Thornberg presented the keys of the brand new, 2015 Chevrolet Colorado pickup truck to Staff Sgt. Jonathan Thompson, his wife Lizz, and their 4-year-old daughter Reece.

Both Jonathan and Lizz were all smiles as the family crawled into the cab of their beautiful new truck. Lizz started the engine, and brought more smiles from the crowd as she honked the horn. 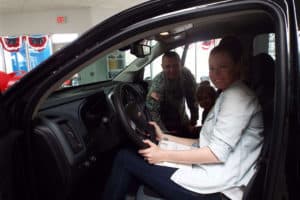 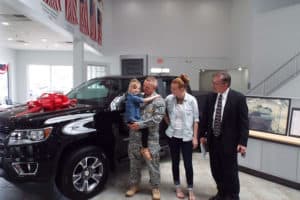