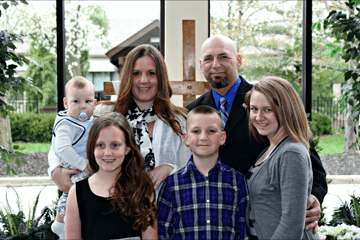 Throughout 2017, All Season Spas and Sundance® Spas collaborated on a special promotion that promised when All Season Spas had sold 100 Sundance Spas, a brand new Spa would be donated to one deserving, disabled veteran.

The happy recipient of the new spa is Michael Evans. In the 1990s, Michael enlisted in the Marines, served four years, took three months off and then went into the Army. He was serving in Afghanistan when the military vehicle he was riding in struck a wall at 35 mph. The impact damaged his spine and shoulders, which had already been troubling him after years of lugging heavy loads.

He’d been planning to serve four or five more years in the Army while attending fire-science classes — so he could become a firefighter after retiring. But the degenerating discs in his back forced him to take early retirement in 2011.

Despite support from family and friends, the transition was rough. The only job Michael could find was driving a truck. “He would come home and just be in excruciating pain,” Mrs. Evans said.

And then, last month, came the hot tub.

It was donated by Sundance Spas and installed by All Seasons. Michael is a quiet man, but on the day the hot tub arrived in late October, the excitement on his face spoke volumes.

“It was like Christmas… I was getting a little choked up.”

Michael said the tub feels as if it were designed for him.

“The configuration of it is perfect,” he said. “I’ve found just the spot where I can sit, and it doesn’t hurt for a little while.”

The hot tub, worth several thousand dollars, gets daily use by Michael and the children, ages 5, 12, 13 and 19. Mrs. Evans said that to hear her husband laughing with the kids is a gift in itself. A hot tub — you wouldn’t think what a difference that could make. But for us, that was everything.”

For more about the donation please see the article below.

Sundance® Spas urges consumers and businesses across the country to join the brand in support of this worthy cause to help the soldiers, veterans and their families make their wishes a reality. To assist donate here – https://www.wishforourheroes.org/donate/. 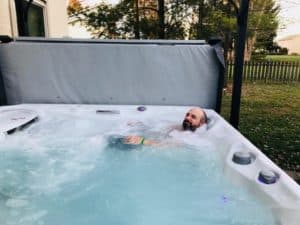 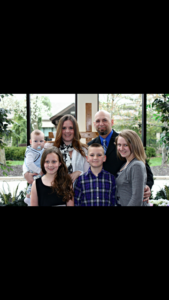