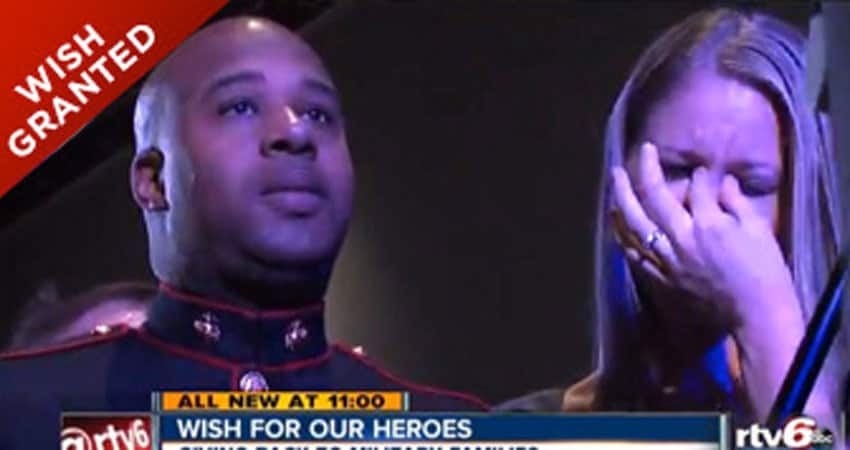 On Saturday, December 14th, Indiana Pacers guard, George Hill and Wish for Our Heroes joined forces once again at the 3rd Annual “HILL”acious Holiday Bash, which was held this year at the Lucas Oil Estate in Carmel, thanks to the generosity of Mr. and Mrs. Forrest Lucas. The event was put together to raise awareness (and funds) for local military families during the holidays. Last year, Wish for Our Heroes we surprised two military families at the event with loads of presents for their children. This year – several families were surprised at the event, and funds raised will provide Christmas for 100 families.

One of the families that was surprised at the event was the Cooper family. SSGT Marvin Cooper has been married to his wife, Nicole Cooper, for 11 years, and they have experienced many trying times during his career in the Marine Corps.  SSGT Cooper joined the Marine Corps November 1999, and has been a Marine ever since. SSGT Cooper and Nicole have 2 children together, and he is in the process of adopting his step daughter, but legal fees have made things very financially hard on them. They have had to put the adoption process on hold since they are unable to pay any more money to their attorneys. SSGT Cooper and Nicole have a son Gage who is 10, SSGT Cooper’s step daughter (Kylee) who is 8, and a daughter (Mariyah) who is 4. Their family transferred duty stations to Indiana in June 2013 and in doing so, their family sustained a $2,200 a month pay decrease due to Nicole leaving her full time job (she is currently seeking employment). SSGT Cooper is now the sole provider for his family and it’s tough for them to live on only his salary.   His step daughter suffers from autism, ADHD and dyslexia, which is very expensive for their family, because Tri Care, the military family health insurance provider, doesn’t cover many of the medical expenses.  Other recent unexpected costs had made it impossible for the Cooper family to provide Christmas for their children this year, so take a look at what Wish for Our Heroes did this holiday season (video compliments of WRTV-6): https://www.youtube.com/watch?v=CPuUDIgI4Ww.