Relief For a Family Before Deployment 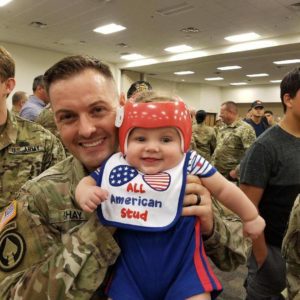 SFC Joe Shay is in the Army and was scheduled for deployment in September of this year. On April 5th, 2018, his wife Stacie gave birth to their first child, Bradley.  They knew they only had a few months in which Joe could be part of the family and enjoy Bradley before he departed for his deployment.  They had planned on using those months to spend quality time together. Unfortunately, a few days after Bradley was born, Joe was called away on a special mission that lasted a few months.  Upon being released from the mission, he was sent several weeks at a time for training out of town. He finally came home and they had a couple weeks to try to be a family and allow Bradley to try to get to know him. Unfortunately, at the same time, they found out that Bradley had severe Plagiocephaly and torticollis, causing immediate need of a cranial band for treatment. Unlike most other insurances, their insurance wouldn’t cover any part of the expensive cranial band and the full expense was left to them. Instead of being able to spend the time as a family, Stacie found herself spending time researching and making calls trying to find some form of assistance, only to hit walls because everything was a long process.  Stacie contacted us and we were able to get Bradley in the cranial band pretty quick!  They were able to spend the last few weeks making memories and enjoying their time together before Joe deployed.  And Joe was able to leave knowing Bradley was taken care of.