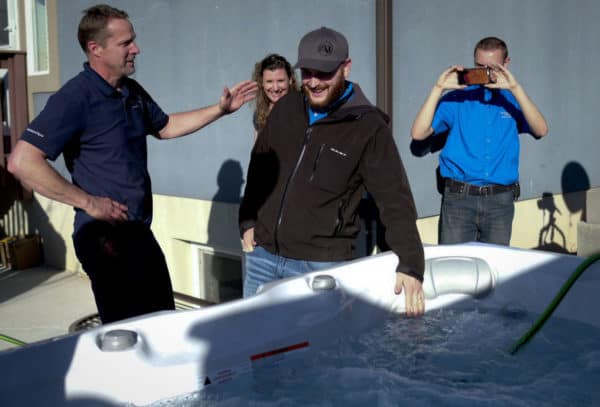 Take A Break Spas & Billiards and Sundance® Spas donate a Hyrdo-Therapy Spa to a Utah Veteran as part of the “Hot Tubs 4 Heroes” Program.

Sundance® Spas and Take a Break Spas and Billiards have made one deserving military veteran and his family the recipients of a free Sundance® Spa. They made this generous donation, together with Sundance® Spas, as part of the WISH for OUR HEROES program.

The happy recipient of the new spa, Jared Vivyan, enlisted in the Army as part of the delayed entry program while still in high school, and he left for basic training in 2006.

He served two deployments, one in Iraq for 18 months, the other in Afghanistan for 15 months. During his second deployment, Jared’s crew was hit with a total of three improvised explosive devices, the last of which caused Jared to suffer head trauma and back and shoulder injuries.

Those injuries have consequences that have carried on into his life, causing severe migraines and intense back and shoulder pain, which affect how he can help his wife or play with his three boys, ages seven months, two and four.

“Like most veterans, they just have some stuff that they’ll live with forever, both physically and emotionally,” Jessica Vivyan said.

Jared left the military in 2013 and has been attending school to earn a degree in electrical automation and robotics, as well as technology management.

The hot tub is one way of helping with much of that discomfort. “This is going to be amazing,” Jared said. “I couldn’t ask for anything better.”

To see more photos and a full write up on the wish by the Daily Herald of Utah, visit  https://www.heraldextra.com/news/local/south/payson/payson-military-veteran-surprised-with-new-hot-tub-by-local/article_cfca7e28-0bf5-5210-8225-91b593c5f71e.html

Sundance® Spas urges consumers and businesses across the country to join the brand in support of this worthy cause to help the soldiers, veterans and their families make their wishes a reality. To donate click here – https://www.wishforourheroes.org/donate/.