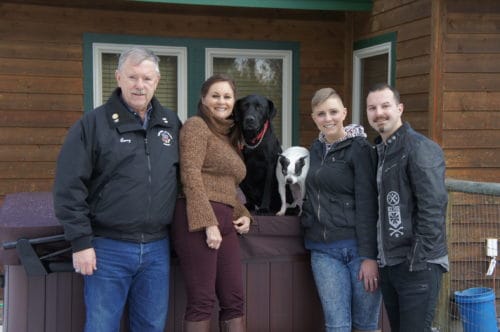 Redmond Spas, Champagne Spas and Sundance® Spas donate a Hydro-Therapy Spa to an Oregon Veteran as part of the “Hot Tubs 4 Heroes” Program

Throughout 2017, Champagne Spas and Sundance® Spas collaborated on a special promotion that promised when Champagne Spas had sold 100 Sundance Spas, a brand new Spa would be donated to one deserving disabled veteran. Champagne Spas then teamed up with Redmond Spas in Oregon to donate the spa to a veteran in their area.

The happy recipient of the new spa, Cathie Raaf, served in the Army Nurse Corps, Chemical Corps, and Civil Affairs. She served in Panama, Bangladesh, Bosnia-Herzegovina, Afghanistan, and Kuwait. While she was in Fort Carson, Colo., in the Warrior Transition Battalion, she received treatment that included five surgeries, as well as therapies for chronic painful conditions affecting her cervical spine, lumbar spine, upper and lower extremities, and other conditions.

She is not able to tolerate narcotic pain medication, as it exacerbates issues with her TBI and vertigo condition, so the Sundance Hyrdo-Therapy Spa has been a great way to ease the pain of those conditions.

Another benefit of having access to the Spa is the distance involved in physical therapy from her home.  She lives in a remote area, and the nearest therapy site is 30 to 45 minutes away, depending on weather and road conditions. In addition to the physical conditions that cause chronic pain, she has been diagnosed with PTSD and anxiety, all which are helped by the hydro-therapy.

“My husband, Larry, served in the Army for 30 years and has been diagnosed with PTSD,” she says. “My daughter also deals with PTSD, and this Spa offers our entire family a chance to connect and relax.”

Sundance® Spas urges consumers and businesses across the country to join the brand in support of this worthy cause to help the soldiers, veterans and their families make their wishes a reality. To assist, visit https://www.wishforourheroes.org/donate/.