Our First Wish Ever Granted 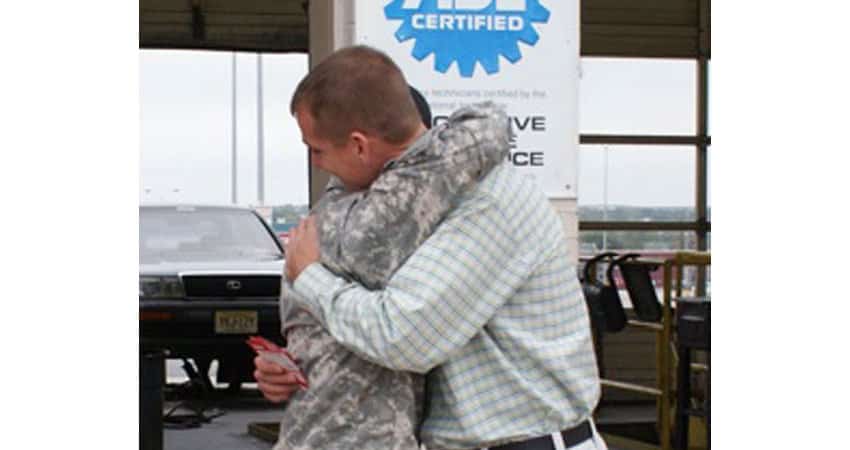 Here’s a look at our very first wish ever granted! The wish went to SPC Rob Forrest , a soldier of 2‐7 Cavalry stationed at Fort Hood (Killeen, TX). Rob, and his wife Samantha, were young parents of four: Michael (11), Nicolas (10), Jason (8), and Heather (3).

In his five and a half years as a member of the US Army, Rob had deployed three times. His first deployment in August 2003 took him to Kandahar, Afghanistan for 9 months, another deployment to Baghdad, Iraq from 2005‐2006, then Baghdad again from 2007‐2008. During Rob’s 3 deployments, his responsibilities were to operate vehicles in combat operations. He sustained 7 separate attacks, which resulted in the destruction of his vehicles, as well as numerous other attacks. Rob was a witness to many of his fellow soldiers being wounded and sent back to the United States.
Rob and Samantha were married on February 14, 2006, in a hospital room next to their son, Michael, who underwent open heart surgery for a rare heart condition, Tachycardia Arrhythmia. Samantha suffered from several medical conditions including Diverticulitis (a rare digestive condition), nonalcohol fatty liver disease, OCD, and chronic migraines, to name a few. Due to her medical conditions, Samantha was not able to work, and daily
trips to the emergency room are common. That made it necessary for Rob’s salary of $1,400 per month to support his family of 6. Typically, on pay day, his entire paycheck was spent on groceries and bills. Despite the daily struggles of Rob and his family, Rob was very optimistic and continuously pointed out how lucky and fortunate his family was to have what they’ve been given.

Rob did not have a functioning vehicle from which to drive to and from work. His 1997 Chevrolet truck was broken down, so W4OH partnered with Precision Tune Auto Care – United States in Killeen, TX to fix his truck and ensure its safety. W4OH covered the $3200 in auto repairs and also purchased Rob and his family $1,000 in H-E-B grocery gift cards to help buy groceries for the Forrest family.