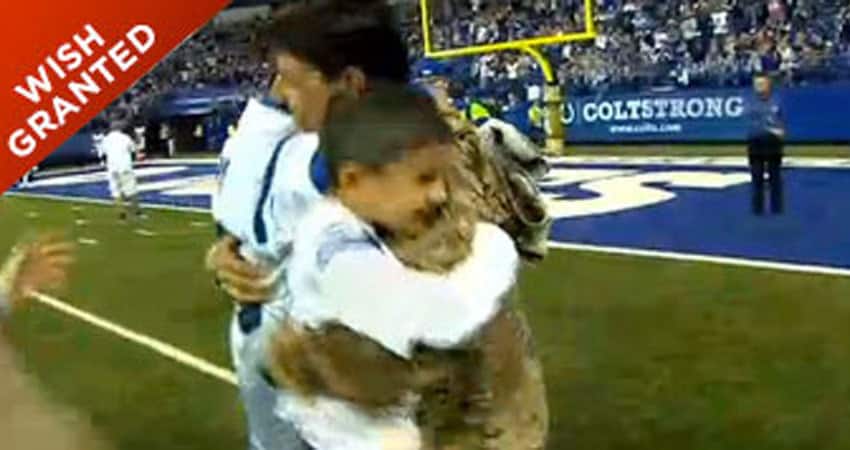 The family of Sergeant First Class Jeremy Inocencio got a big surprise when they were brought to the middle of the field at halftime and presented a brand new vehicle purchased by McAfee. The family has just one car that was unreliable and breaking down. Colts mascot Blue drove the vehicle on to the field.

Little did the family know that Dad (Sergeant Inocencio) was riding in the back seat! Sergeant Inocencio was scheduled to come home from Afghanistan at the end of the month for Thanksgiving. His wife Christin and sons and Dominique and David got a big surprise. When the father stepped out of the car, the rest of the family ran from midfield to embrace Sergeant Inocencio near the end zone. The family reunited early thanks to the Wish for Our Heroes organization and a big helping hand from McAfee.

Sergeant First Class Inocencio’s ten year Army career has sent him to Egypt, Thailand, Iraq, Afghanistan, and nine other stations around the world . Inocencio and his wife (also on active-duty at the time) met as soldiers while at a sniper training course at Fort Riley, Kansas, in 2005. Since then, their family has endured many deployments and 3 different moves. In eight years, SFC Inocencio has missed half of his family’s birthdays and anniversaries due to military obligations, including the birth of his youngest son.