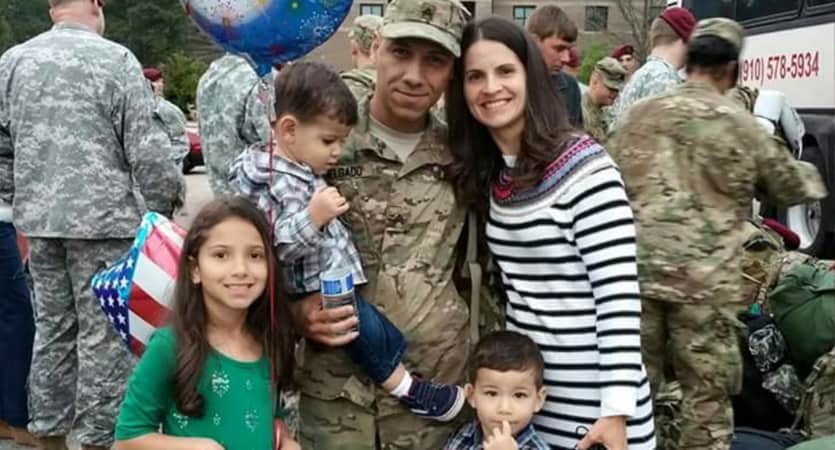 We are pleased to announce the North Florida chapter has granted a wish to a family in North Carolina. Your generosity has allowed this wish to come true for a very needy family.

Mr. and Mrs. Delgado came to the United States from Puerto Rico and Mr. Delgado has been in the military for about 9 years, stationed in Fort Bragg, North Carolina. He has been deployed twice and returned most recently in March of 2015. Together they have 3 young children, Carlos, Christian and Camila.

Unfortunately, Mrs. Delgado was diagnosed with brain malformation, which is a deformation of the cerebellum – the very back part of the brain, which is linked to the spinal corn. The deformation does not allow normal flow on spinal fluid. This affects mobility, creates numbness in the arms, causes intense pressure on the brain, along with many other issues. After Mrs. Delgado had her baby Carlos, the doctors ordered an MRI, which is how the malformation was discovered.

She was told she had 6 months to get ready for the surgery. She found out she was pregnant soon after that, making the pregnancy to be considered “high-risk.” After Christian was born, the symptoms of the malformation go worse because of the obstruction.

Mrs. Delgado had surgery this October and spent 5 days in the hospital. She can’t move by herself and can’t bend or hold anything more than 5 lbs. She’s scheduled to do 6 months of occupational and physical therapy 3 times a week.

The Delgado family wished for help with medical bills and child care. With 3 small children – Mrs. Delgado as a stay-at-home mom would normally do everything – now, the stress and loud noises hinder the healing process. Childcare costs about $700 for one month.

We were able to help with a grant of $1,000 to help with childcare costs. Mrs. Delgado had this to say after receiving the wish:

“I want to thank you and the organization for giving us the support through this hard time. From the first moment we spoke, like I mentioned, it was more like talking to a friend than a stranger. I will always be grateful for what you and the organization did for my family. This is a very hard situation for us, especially for me. You help me keep my faith and hope through this process. There is nothing that I love more than my family and I’m blessed to have them.”